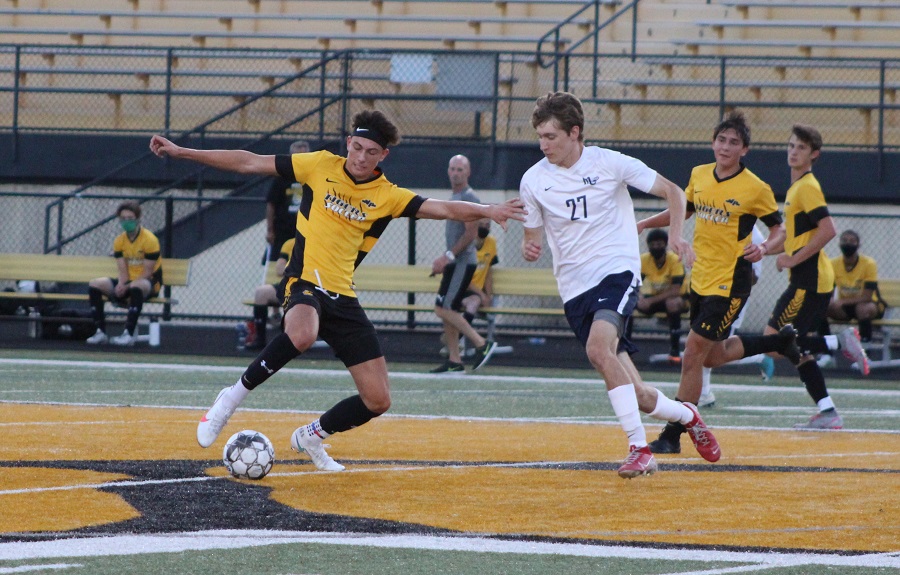 The North Allegheny Boys Soccer team traveled to Pine Richland on Wednesday to take on their section rivals and came away with an impressive 5-0 victory in Section 1-AAAA action.  This was the second half of a home and home series this week, which began with a 1-0 win on Monday night.

The Tigers started out strong by forcing a corner kick less than two minutes into the game.  Kensley Owens took the corner and Jacob Gardner skied in the air to get above the Rams defenders and put the header into the back of the net to give NA the early lead.

The Rams created the next chance a few minutes later on a corner, but a diving save by Mikkel Hindsbo kept the 1-0 lead intact for the Tigers. The back-and-forth play continued as William Stasko ripped a shot ticketed for the top corner of the net, but the Pine goalkeeper made a beautiful leaping save. The remainder of the first half was back and forth but NA had the majority of the possession.  The defense of Owen Smith, Max Kress, Jacob Gardner and Jonathan Swann was able to keep the Rams forwards in check.

The second half started quickly for the Tigers with a deflection dropping right to the foot of Sean Moore.  He quickly deposited the ball in the upper 90 of the net to give the Tigers a 2-0 lead only four minutes into the half.  NA got two more chances from the right wing but shots wide by Owens and Evan Anderson missed, keeping the game at 2-0.  Both teams were playing a hard game but NA pulled away with Owens and Philip Iozzi getting consecutive goals to put NA up 4-0.  North Allegheny capped off the scoring with just over a minute left in the game when Anderson took a long pass and tapped it into the air and chipped it over the goalkeeper’s head for a highlight reel goal and a 5-0 victory.