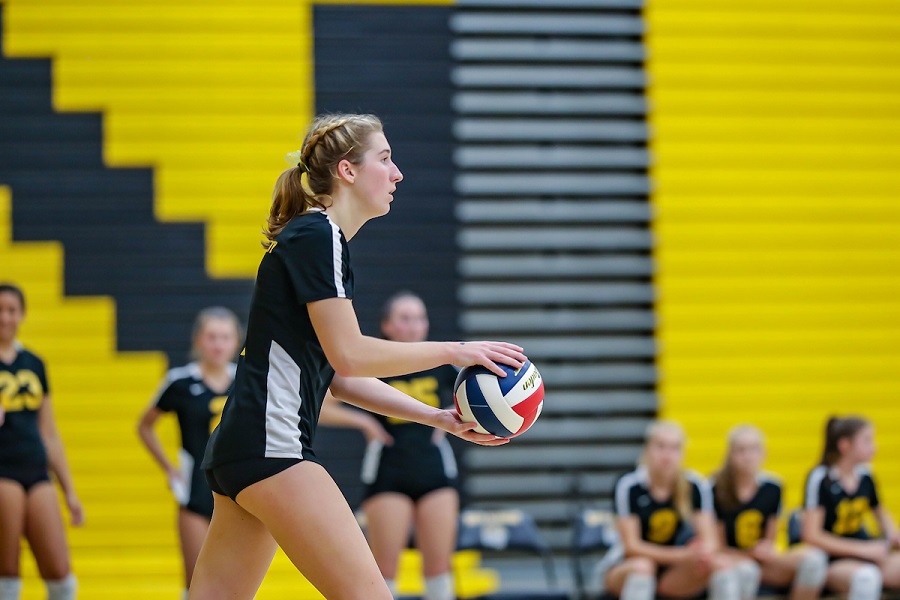 The three-time reigning PIAA champions wrapped up a perfect regular season on Thursday night with a 3-0 sweep of the Pine-Richland Rams. The Tigers earned the home victory by set scores of 27-25, 25-9, 27-25.

Riding a five-game winning streak, including a victory against third-ranked Moon, Pine-Richland hung tough with North Allegheny in the opening set. Holding a 24-23 lead, the Rams couldn’t put the Tigers away, however, as senior Maddi Beer tied the score at 24-24 with a kill. Following a kill by junior Sophie Catalano that gave PR a 25-24 lead, again North Allegheny rallied and scored the next three points to claim a 27-25 win. A block from senior Paige Morningstar gave NA a 26-25 lead and a Jadyn Perkins kill finished off the Rams in the opening set.

After a back-and-forth first set, North Allegheny rolled to a 25-9 win in set two. The third set very much resembled the first and saw Pine-Richland surge ahead to an 18-13 lead, powered by sophomore Kali Doctor’s six kills. Receiving contributions from a variety of players, the Tigers clawed their way back. Beer delivered three kills and three blocks, junior Rachel Burton stepped in for a kill and two blocks to and sophomore Mia Tuman notched six kills to help NA tie the score at 23-23. Similar to set one, a kill by Catalano gave PR a 24-23 lead but the Tigers once again scored four of the final five points to win the set, 27-25.

Down the stretch, senior Paige Miller blistered the Rams with powerful and accurate kills, collecting all NA’s final four points. Miller led the Tigers with 15 kills and posted a team-high 14 digs on defense, earning her Wright Automotive Player of the Game honors.

Other NA standouts included Tuman with 11 kills and Beer with eight kills on the evening. Morningstar tallied 10 digs and dished out a game-high 32 assists. Tuman, Morningstar and sophomore Rachel Pilotta all tallied aces in the victory.

With the win, North Allegheny concludes the regular season with a 12-0 record, while Pine-Richland dips to 8-4. Both teams will prepare for the WPIAL playoffs, which begin next week. The WPIAL brackets will be announced on Monday. 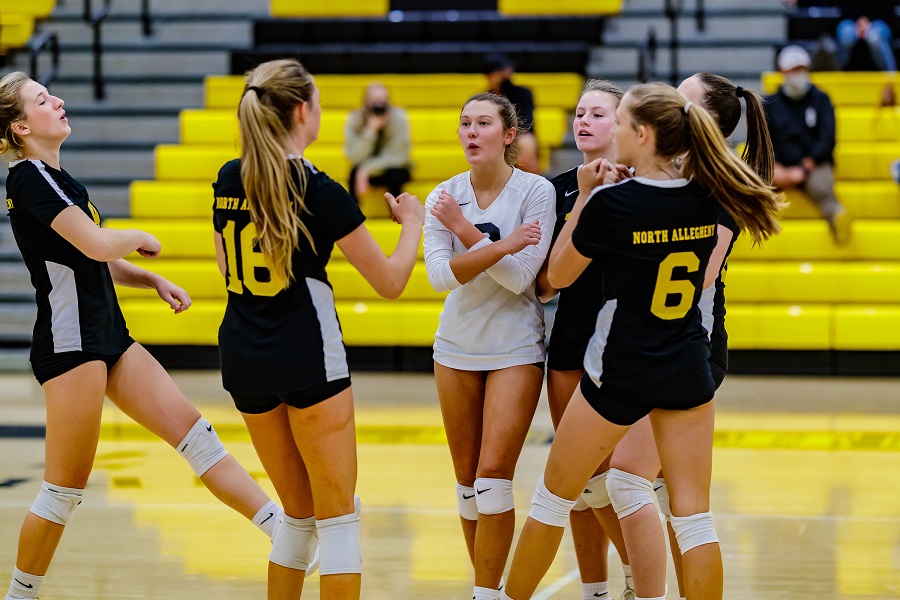 Similar to Saturday’s meeting, Shaler came out strong to win the opening set, 25-17, with the help of Mia Schubert, who led the Titans with 19 kills on the night.

The victory secures a Section 1-AAAA crown with an 11-0 record. Shaler falls to 9-2 in section play. The top-ranked Tigers will conclude the regular season with a home date with the Pine-Richland Rams on Thursday at 7:30 p.m. 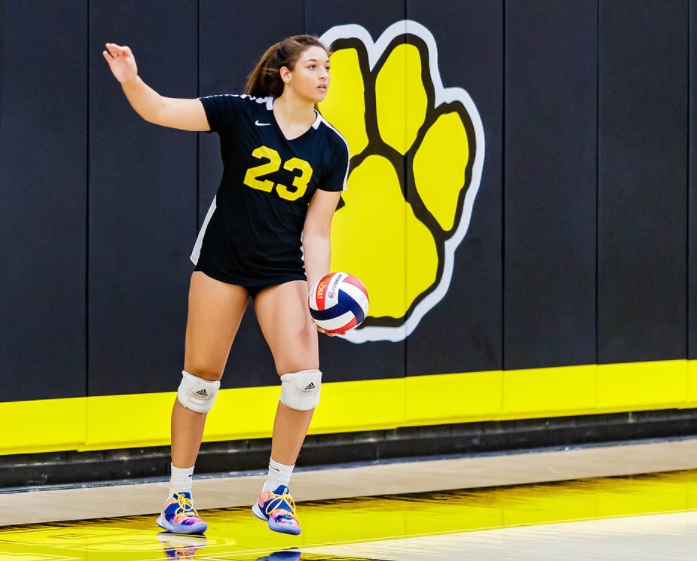 Two undefeated teams clashed on Saturday in a battle for first-place supremacy in Section 1-AAAA. The contest lived up to its billing as the North Allegheny Tigers rallied back from a 2-0 deficit to win the final three sets and claim a 3-2 victory. The result keeps North Allegheny’s section winning streak intact at 50 in a row. The Tigers have not lost a section match in over four years, since a 3-1 defeat at Seneca Valley on Sept. 20, 2016.

The NA winning streak appeared to be in jeopardy as Shaler stormed out of the gates in set one. Junior outside hitter Mia Schubert powered the Titans offense with six kills en route to a 25-22 win.

Set two was a lengthy nip-and-tuck affair, in which Shaler prevailed 30-28. Schubert once again led the way for the Titans with an eight-kill effort in the set.

The Tigers strength in the middle began to take a stronghold in set three and slowed the Titans momentum. Junior Jadyn Perkins peppered the Shaler defense with three kills and clogged the net with three blocks in third set, helping NA to a 25-17 victory.

The NA block of Perkins and senior middle hitter Maddi Beer played a pivotal role in set four. Trailing 15-12, Beer sparked a late run by the Tigers with an emphatic kill and block. North Allegheny scored 13 of the final 17 points to come away with a 25-19 victory and force a fifth a decisive set. Perkins notched four kills and two blocks in the set, while Beer added three kills and a block.

In the fifth set, the Tigers jumped out to a 5-1 lead and never looked back, fending off the feisty Titans for a 15-8 triumph. Sophomore Mia Tuman delivered three kills in the final set, on her way to an 18-kill performance. She added a team-best 26 digs on defense and two aces.

Fittingly, Perkins finished off the afternoon with a match-clinching block to clinch the victory for North Allegheny. Perkins ended the day with 18 kills and a team-leading eight blocks. For her outstanding play, Perkins was named the Wright Automotive Player of the Game.

Following the victory, North Allegheny improves to 10-0 in Section 1-AAAA, while Shaler dips to 9-1. The two teams will have a quick turnaround for a rematch as the Titans will host the Tigers on Tuesday night. 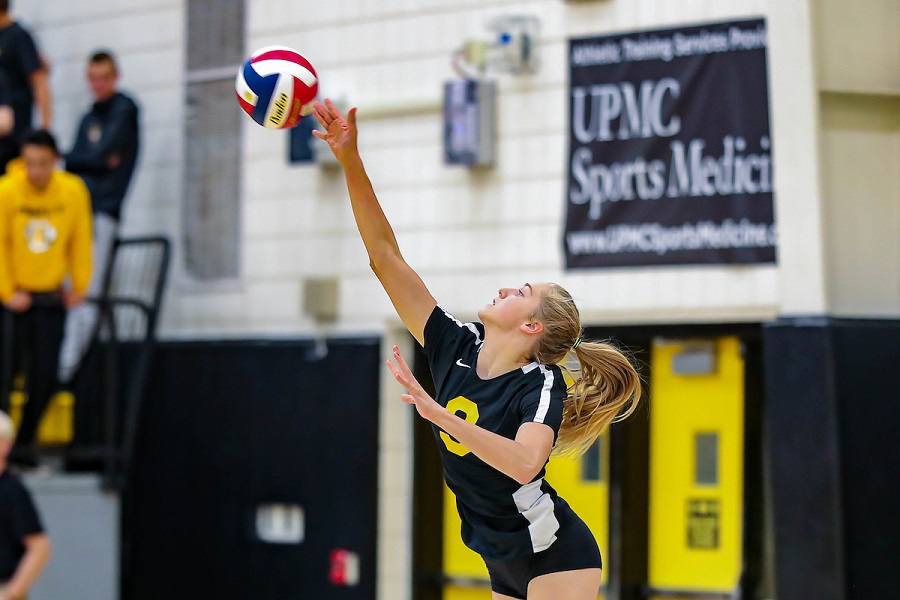 The North Allegheny girls’ volleyball team rolled to a 3-0 victory over the North Hills Indians on Wednesday night in Section 1-AAAA action. The Tigers swept the Indians by set scores of 25-21, 25-18 and 25-16.

The underdog Indians jumped out to a 6-1 lead in set one and held a 21-20 advantage late in the set. However, the three-time reigning state champions returned to form and went on a 5-0 run to end the set for a 25-21 victory. Senior Paige Miller spearheaded North Allegheny’s comeback with six kills and two aces. On the evening, Miller finished with 11 kills, a team-best 11 digs and four aces.

In set two, North Allegheny continued the momentum gained in the previous set and grabbed an 18-10 advantage. Despite a late push from North Hills, the Tigers controlled the action for a 25-18 win. Senior Madison Beer posted three of her five kills in the set and junior Jadyn Perkins broke out the big swings for four kills. Sophomore Mia Tuman added three kills and two aces in the second set.

North Hills senior outside hitter Sydney Ryan did her best to keep the Indians afloat in the third set with six kills, but North Allegheny overwhelmed its opponent for a 25-16 victory. Tuman continued her outstanding all-around performance and finished the evening with a team-best 13 kills and nine digs. For her effort, Tuman was named the Wright Automotive Player of the Game.

With the win, North Allegheny jumps to 9-0 overall and in Section 1-AAAA. North Hills slips to 3-7 in the section. The Tigers will host Shaler in a showdown for first place on Saturday at 11:30 a.m. 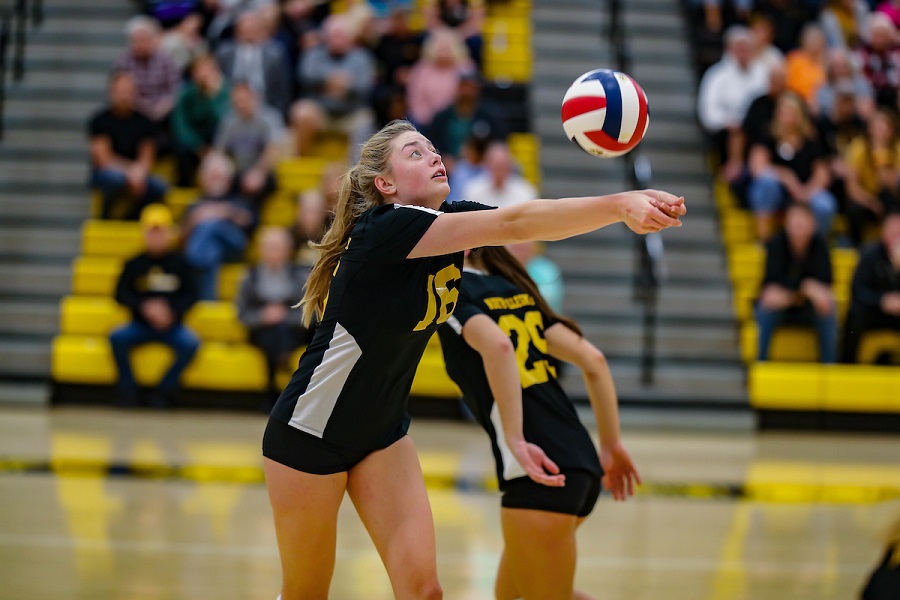 Top-ranked North Allegheny maintained its unblemished record on Monday night with a 3-0 sweep of Seneca Valley in Section 1-AAAA action. The Tigers won by set scores of 25-18, 25-13 and 25-17.

In set one, the visiting Raiders challenged the Tigers and held a 13-12 lead in the early going. However, led by the powerful swings of senior Paige Miller, North Allegheny pulled away for a 25-18 win. Miller tallied four kills in the set, followed by junior Rachel Burton with three kills. Miller and Burton totaled seven and four kills, respectively, on the evening.

The Tigers opened set two with an immediate 9-1 lead and cruised to a 25-13 win. Senior setter Paige Morningstar had a terrific all-around performance with three consecutive aces and two blocks. For her efforts, Morningstar was named the Wright Automotive Player of the Game. Senior Madison Beer contributed two blocks and a kill in the second set as well.

Once again in set three, North Allegheny charged ahead to a 5-1 lead and rolled to a 25-17 win to clinch the sweep. Despite a five-kill effort from Seneca Valley senior, and Ohio State commit, Sara White, North Allegheny received numerous contributions across the lineup for the win. Junior Jadyn Perkins closed out the match with a kill, one of six on the night for the middle hitter.

With the win, North Allegheny leaps to 8-0 overall and in Section 1-AAAA. Seneca Valley dips to 4-5 in section play. The Tigers will host North Hills on Wednesday night.